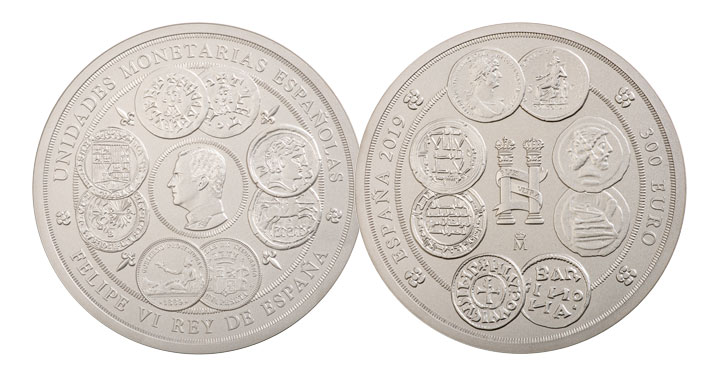 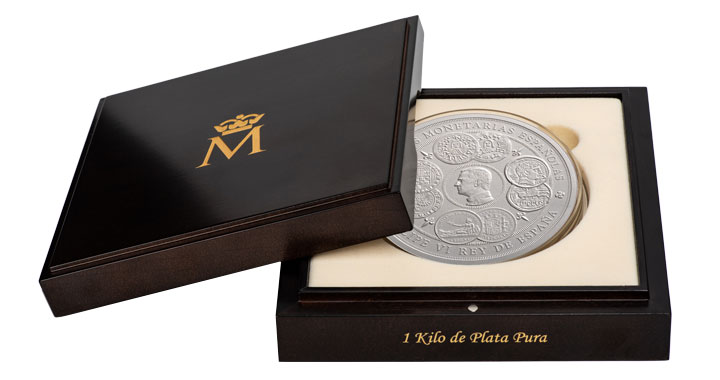 The Real Casa de la Moneda is dedicating its second mintage of a one-kilo silver coin to the history of the main monetary units which were in circulation on Hispnic territory at some point in the period from its political and economic unification under the Romans to the dawn of 21st century.

The coin depicts various numismatic pieces which are essential to understand the evolution of the various monetary systems that governed the peninsular economy, some originating on home ground while others were born of foreign influence.

On the obverse, in the centre of the piece, is reproduces a portrait of His Majesty the King Don Felipe VI wearing the insignia of Captain General, surrounded by the observe and reverse of different monetary units: a Real from the Catholic Monarchs minted in Burgos after 1947, a Tremis from Recaredo I minted in Toledo between 586 and 601, an As minted in Bilbilis between the 2nd and the 1st century b.C. and a Peseta minted under the Provisional Government of 1869.

In the centre of the reverse the Hercules' Columns are reproduced girded with a band with the motto PLUS ULTRA, and, below, the CECA mark, surrounded by the observe and reverse of the following monetary units: a Dirham of Abd al-Rahman minted in Al-Andalus between 755 and 788, an As from the Roman Republic minted between 225 and 217 b.C.,  a Sestercio  minted in Rome between 117 and 138 and a Dinero of Louis the Pious minted in Barcelona between 814 and 840, which is kept in deposit in the Gabinete Numismático del Museu Nacional d'Art de Catalunya.

Click to see enlarged images of obverse and reverse of this set of coins.

The characteristics of the piece are as follows: