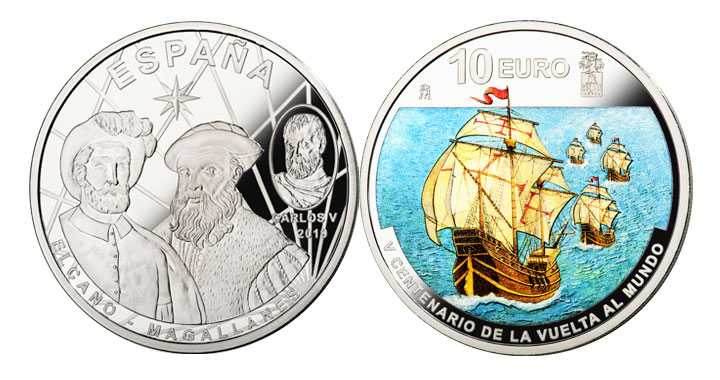 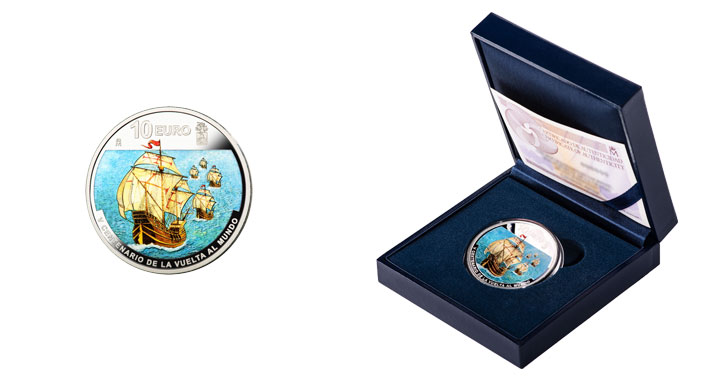 Two hundred and thirty-nine men and five naos left Seville in 1519 in search of a route to the Species. Three years later, eighteen of them returned aboard one of the naos, after having managed to circumnavigate the world.

To commemorate the 5th Centennary of the First Round-the-World Voyage, the Royal Mint of Spain issues a silver coin, being the first of the four silver coins that will be issued annually.

Click here to see enlarged image of the obverse and reverse of this coin.

The coin’s characteristics are described below:

On the obverse, two images of Juan Sebastián Elcano and Fernando de Magallanes, taken from the portraits of both housed at the Naval Museum of Madrid, are reproduced. Above these images, a rose of the winds. On the right, inside an oval, detail of the head of the sculptural work entitled "Carlos V", made by Leone and Pompeo Leoni, which is kept in the Prado Museum, Madrid; below, the legend CARLOS V and the date 2019.

On the reverse, a scene with five naves crossing the sea is reproduced in colours. On the top of the coin, the face value of the piece, 10 EURO. On the left, the mint mark; on the right, the coat of arms of Juan Sebastian Elcano. In the lower part of the coin the legend V CENTENARY OF THE ROUND-THE-WORLD VOYAGE.